As an enterprising ‘hard studying’ medical student at the University of Amsterdam, I necessarily felt the need for a refreshing pilsner a couple of times a week.  I discovered, in a side street of the Leidseplein, the most wonderful bar, called ‘Eijlders’. There I met many mystical and mysterious people from the Dutch Antilles who, over drinks, regaled me with stories of voodoo and vamp-ires. This was the basis for upcoming paranormal novel 'The Robot and the Vampire '.

The Robot and the Vampire 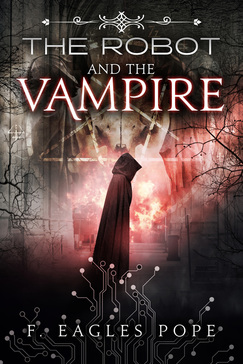 The Robot and the Vampire tells a futuristic story of man and machine become...more than most could imagine. Take Vladg, a DNA humanoid robot called a Duplicant. He is a sexual companion to a vampire named Lydia, who like so many vampires of lore is searching for her true love. Her diabolical husband, in what you might call a beyond-open loveless marriage, Bram Alucard, is a very powerful vampire who in his randy philandering comes across a beautiful receptionist named Phoebe at where else, but the factory where robots are manufactured.

He casts a spell over  her, but Phoebe induces her twin sister, Phoenix, to take her place on a date with Bram. She should have known a vampire would know the difference. He becomes so enraged at her foolish attempt to deceive him that he sends her sister back to her impregnated.