Killing Me Softly With Your Love 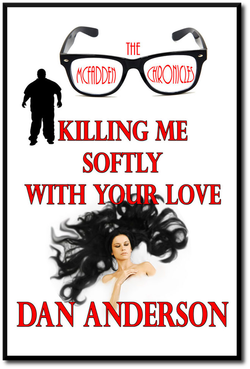 A serial killer is on the loose!

But you may die laughing before the next victim is found.

With the publication of Killing Me Softly With Your Love, a humorous mystery, award-winning author, Dan Anderson, takes us on an unforgettable romp through the noir underbelly of Southern California in the pursuit of a serial killer who murders his female victims in a most unusual manner.

Chauncey McFadden, a portly, wisecracking private detective with limited homicide experience is hardly prepared for the danger and intrigue into which he is drawn when he is lured from his world of mundane investigations to find the perpetrator of a series of grisly murders. Realizing that he may be in over his head, Chauncey watches the body count climb as he pursues one lead after another with discouraging results.

The pursuit of the killer leads through a cast of zany characters that includes a quirky police lieutenant who puts Chauncey down at every opportunity, a crime syndicate boss who forces Chauncey to work for him, a secret government intelligence agency that operates outside of normal boundaries, and an international consortium of Palestinian and yakuza terrorists.  Will the beleaguered Chauncey survive an attack on his own life and bring the killer to justice, or will he become another fatality at the hands of the ruthless serial killer?

In The McFadden Chronicles, Dan Anderson combines his two favorite subjects, mysteries and humor, to bring a new voice to the genre and show how much fun reading can be in the hands of an irreverent craftsman.