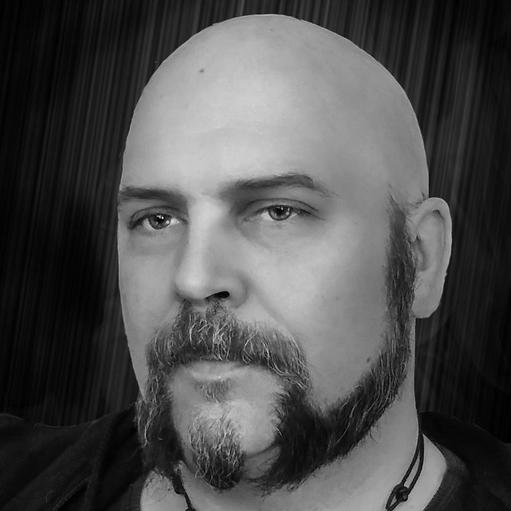 Like all the kids born in the 1970's, Lance Tuck was baptized in the white light of late night television, cable movie channels, and VHS. A world of cinematic influences combined with his father's classic pulp novels (weird fiction and science fantasy, by the likes of Ray Bradbury, Robert E. Howard and H.P. Lovecraft) and his uncle Dan's extensive collection of 60's and 70's era comic books to inspire an enduring love of fantastic characters and stories. His mother,  Beth, worked tirelessly as a nurse's aide at the local Nursing Home, right next door to their own home. Lance spent hours listening to the stories told by the residents, of times and places not far past...Of Indians and Irishmen, of heroism and atrocities, of sacrifice and regret. These everyday dramas inflamed his imagination. His Grandfather's ordered, logical view of the world as a rational materialist instilled the ability to observe the nuances of the world around him, and his Grandmother's love of Anthropology and culture inspired him to look even further afield, to lands and peoples exotic and alien.

After a childhood spent exploring the fossil beds of the High Plains (where you can see proof that there were once monsters here!), Lance attended Kansas State University where he studied Psychology, Anthropology and Sociology, focusing on more esoteric aspects of the human condition. Research into trance/ecstatic possession, ceremonial chemistry, ancient religions and folklore, and the biochemical foundations of perception and sensation further fueled his imagination. A popular class on the history of witchcraft and the occult provided direct exposure to factual elements behind several famous cases of paranormal activity, offering a historical scaffold upon which to base a fictional world.

After graduating with a BA in Psychology and a BS in Anthropology, Lance went to work as a tattooist, true to form, at a shop called Skin Illustrations in Lawrence, Ks. There he altered the appearance of thousands of people, young and old, each unique in their goals and motivations. Each one had a story,  and Lance told stories to them, too. Sometimes he would recite favorite movies from memory, films like Blade Runner or A Boy and His Dog. Sometimes he would tell epic story lines from classic comic books, performing the characters as he marked the flesh of his clients. Sometimes he would tell them his own stories, aural alchemical amalgamations of the stories and characters and people and events that had burned themselves into his mind, steeped in the crucible of his own personal mythology, populated by all the gods and devils that ever tormented mankind.

All of these threads have been woven together to create a universe where magic is real, and ancient gods still pry into the lives of men and women...a world where good and evil are not always cut and dried concepts, where the damned dance tantalizingly close to redemption, and the Chosen are saved by only a razor-thin margin. Where history and fantasy blend together, the Paladin Sequence begins.
You may keep up on Tuck's activities here:
Website - www.thepaladinsequence.com
Facebook Author Page - https://www.facebook.com/AuthorLanceTuck/
Facebook Book Series Page - https://www.facebook.com/ThePaladinSequence/
books, literature, fiction, authors, writing, readers, kindle, paperbacks, nook, young adult, romance, mystery, suspense, thriller, new adult, fantasy, paranormal, action adventure, urban fantasy, science fiction, crime, horror, literature, chick-literature, spiritual, nonfiction